Yvess Rossy has been a household name for many years now since 2008 he has come a long way with his flying surfboards an i have yet to feature him in me blog-werld, so;

Jest type his name into ur U-tube browser an u will find many videos bout him going back many years. They are all fun to watch…an until recently he hasn’t gotten much publik recognition, this flight here in this vid an his training his parachuting friend to fly one also is pert incredible, the most incredible vid to date of his achievements i believe, even better than flying over the English channel an da grand canyon is dis vid 🙂

Enjoy ur Week everyone

‘ BirdMan is what i call him ‘

Rossy developed and built a wing-suit system comprising a backpack equipped with semi-rigid aeroplane-type carbon-fiber wings—with a span of about 2.4 metres (7.9 ft)—powered by four Jet-Cat P200 jet engines, modified from large kerosene-fueled model aircraft engines. This has led to him being referred to in the press by various monikers, such as The Airman, Jetman, Rocketman, and Fusionman.[2] 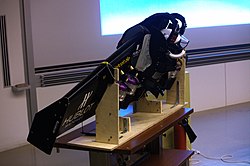 In November 2009, Rossy attempted a crossing of the Strait of Gibraltar, hoping to be the first person to fly between two continents using a jetpack. He leapt from a small plane about 1,950 m (6,500 ft) above Tangier in Morocco and headed in the direction of Atlanterra, Spain. The flight was expected to take about a quarter of an hour. Strong winds and cloud banks forced Rossy to ditch into the sea just three miles from the Spanish coast, where his support helicopter picked him up ten minutes later. He was flown to a hospital in Jerez and soon released unhurt. The Spanish Coast Guard retrieved the jetpack, which had a parachute and a float.

On 5 November 2010, Rossy flew a new version of his jet-powered flight system and successfully performed two aerial loops before landing via parachute. He had launched from a hot air balloon piloted by Brian Jones at 2,400 meters (7,900 feet).

Since 2007 one of his training sites is in Spain, in the private airfield Skydive Empuriabrava in Empuriabrava (Girona, Costa Brava).[8][9] On 7 May 2011, Rossy reportedly flew above the Grand Canyon in Arizona. The United States Federal Aviation Administration (FAA) had classified his flight system as an aircraft. When it finally granted him a license, the FAA waived the normal 25 to 40 hours of flight testing time, and Rossy acted quickly to complete his flight. Reporters, who had been waiting nearby since the cancellation of the original scheduled flight—on the day before—were not informed. There were, therefore, no independent witnesses to document his flight

A BIT OF More of an amazing adventure is life an the werld around us, come take a 13 minute flight round da werld

been feelin’ schetched out, but well, it’s a serene sunday! so time to fly round da’ werld a bit.. get uplifted an stay serene this fine day!

Have a cuapa java er whatnot an enjoy 🙂 if u liked the last danny mac video well, this one is most manifiQue :)…

Yes folkZ he does ride this ridge,,,watch see, i especially like the ending ,,an well the middle also 🙂 cheers have a great one evryone 🙂 Q

jest in cas ya missed da last one bout danny!

Don’t grieve. Anything you lose comes around in another form.”-Rumi
~~~~~~~~~~~~~~~~~~~~~~~~~~~~
here is my 2 Cents Werth
MUSE: Word History: Ever since Chaucer first mentions the Muses in a work from around 1390, English poets have invoked these goddesses like so many other versifiers since the days of Homer, who begins both The Iliad and The Odyssey with an invocation of his Muse. The word Muse comes from Latin Mūsa, which in turn is from Greek Mousa. In Greek dialects, this word is found in the variant forms mōsa and moisa, and together these indicate that the Greek word comes from an original *montwa. As to the further origins of this form, a clue is provided by the name of Mnemosyne, the goddess of memory and mother of the Muses. Her name is simply the Greek noun mnēmosunē, “memory”—the faculty of memory was indeed the mother of invention for the ancient Greek professional poets and bards whose job it was to compose new poems in traditional styles on festive occasions, to recite the verses of Homer, and to improvise material whenever they had a memory lapse. Greek mnēmosunē is derived from the root *mnā-, an extended form of the Greek and Indo-European root *men-, “to think.” This is the root from which English also gets the words amnesia (from Greek), mental (from Latin), and mind (from Germanic). The reconstructed form *montwa, the ancestor of Greek Mousa, also comes from this root and probably originally referred to “mental power” that enables poets to craft verses—the Muses were the Greek poets’ divinized conceptions of the faculties that help them to create and recite poetry.
******
Definition of MUSE frum meriam websters werld;
1
capitalized : any of the nine sister goddesses in Greek mythology presiding over song and poetry and the arts and sciences
2
: a source of inspiration; especially : a guiding genius
3
: poet :
intransitive verb
1
: to become absorbed in thought; especially : to turn something over in the mind meditatively and often inconclusively
2
archaic : wonder, marvel
transitive verb
: to think or say reflectively
— mus·er noun First Known Use of MUSE
15th century secondarily;
Origin of MUSE
Middle English, from Middle French, from Latin Musa, from Greek Mousa
First Known Use: 14th century
~~~~~~~~~~~~~~~~~~~~~~~~~~~~~~~~~~
Muse…. frum another dictionary:
1. Greek Mythology Any of the nine daughters of Mnemosyne and Zeus, each of whom presided over a different art or science.
2. muse
a. A guiding spirit.
b. A source of inspiration: the lover who was the painter’s muse.
3. muse Archaic A poet.
~~~~~~~~~~~~~~~~~~~~~~~~~~~~~~~~~
an also some people do too!
ah but what can one do
when ones life is squeezed out
like the juice of a lemon
😦  frum his so called Muse  😦

BEAR is Bearing to think ‘ of me Muse!

‘Peace & Namaste’ 2 U frum
***it’s all in how one interprets da’ werd i assume…….
an to which context one puts it into!.I didn’t enter a post-it fer da’ last week cuza my Muse…an time is of essence an also,

Life is to short to waste it on a MUSE that lives in poetic denial, deciet, neglect an unrightious betraying disharmony.
Broken Promises are the legacy of this muse!
** .. delighttogetmonitarilysays ..*
WTF FOR? i wunder but a waste of 5 plus years an thousands of dollars on his MUSE!
Love is forever ,,,,even if tarnished by a MUSE an mis-use!

Danny MacAskill is his name an skill on a bike is the name of his game!

Danny don;’t get off track too often, once ya see the vid ya will know what i mean!

even love his choice of songs fer this one!

his skill is werth a trippple dose but i’ll save the best one fer a post-it all by itself on another page… 🙂 but these will suffice fer the day. A post-it dedicated to my son steven {22yrs old} whom does similar tricks an loves to ryde his bike!..yep big boys still ride bicycles fer fun U bet! why Knot!.

“Crashing is not an option!”

Stay on track evryone no matta how ya land

In an off chance on an off season i spotted this Rocky Mountain Lynx!

Animals Only No People Allowed

OFF season are da’ werdz of da’ week at werdpress weekly photo challenge!

go fer a ryde wit marta …..jest cuz..it’s aero week in Q’s werld… sumtimes it’s all downhill frum dere…..when there is no lift what more fun thing to do than some loop de loops an stalls etc etc………….watch…an enjoy!

She titles this piece 🙂 My first Xtreme aerobatic flight!
don’t weery the pilot tell ya when to breath

welcome to cannibas camop .wow if i had a ski area an lotsa monney thats also what i would do 🙂 peace out evryone frum smiley

off to a camp bud that takes cash for budly experiences

Calling all marijuana aficionados: beginning on July 1, you can now book an all-inclusive vacation at a pot ranch in Colorado. Billed as the “nation’s first cannabis-friendly ranch resort,” Durango’s 170-acre CannaCamp is located in a setting that won’t surprise those familiar with the dude ranch concept. Guests pay between $395-449/night per person to sleep in rustic cabins, enjoy three meals on site every day, and indulge in outdoor adventures like mountain biking and hiking in San Juan Mountains. But how many mountain retreats include a “Wake+Bake Breakfast,” 4:20 Community Hour, and “Cooking with Cannabis” classes?

when ur on top! “LAUGHT IT OFF YEP” after releasing frum being at the end of ur rope 🙂

sO: fly high an enjoy the ryde no matter which way one turnz lol 🙂
~~~~~~~~~~~~~~~~~
Dis’ 2012 Kunstflugpassagiere im video reminds me jest a lot of my instructor when i was a teenager Walt Sweeney he accidentally bought it back in the 80’s bless his soul when coming in low with the tow rope dragging an it took him to the ground in his tow plane he was towing gliders up that day an the tow rope hooked on the power lines by the highway . 😦  was a drag to loose him then a talented instructor an made one laugh an enjoy the ride,,and well that’s what this post it is all bout is enjoying the ryde the best ya can in life no matter what direction it might take ya up down sideways er what not huh! Learn frum the fun moments an even the fun but remember also 🙂 it’s ok to have fun! well hope u click on this video an enjoy it 🙂 QI

It brought joy to Walt as an instructor to make ya laugh an enjoy the ride 🙂 to give ya a thrill safely 🙂 so remember every one that reads my stuff 🙂
laughing feelz good ,,,,,so hope this makes ya laugh off the edge of the extreme side jest a bit fer jollys 🙂 I always remember the loops de loops an the Hammerhead stalls to be the most fun when flying 🙂 Yeahhhhhhhhhhaaaaaa :)an remember walt saying don’t kill us son! lol

SO: Fly safe as ya can however ya fly U an remember
“CRASHING IS NOT AN OPTION!“
oh yeah ps;